As the curtain fell Friday night at San Francisco Ballet's premiere of John Cranko's 1965 evening-long "Onegin," elegant Vitor Luiz looked spent, and petite Maria Kochetkova gasped for breath as her shoulders curved forward. Moments earlier, they had shot across the stage and spun through space like dervishes lost in the centripetal force of ruined love. Now Kochetkova and Luiz gazed out at us, exhausted. The audience leapt to its feet in a roar of approval. "Onegin" was a home run. 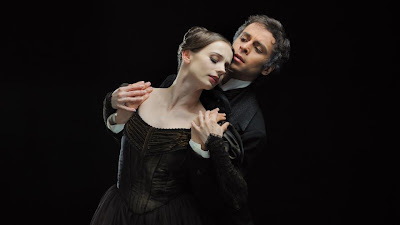 While not everything about this ambitious, nearly 50-year-old work is a success, Friday's production of "Onegin" gripped the audience tightly, because it is a modernist dance arrayed like 19th-century fairy tale ballet, rife with social context yet rich with the competing forces of individual desire. It is one of those iconic stories about passion and morality that has legs, because its themes never grow stale.

Then there is the dancing. The group action starts out heavy on the pantomime and the presentational, and even seems trite at first, but then grows more heated with every scene. The pendulumlike trajectories that begin to build and the almost impossible physics of the catapulting movement dazzle us. Before long, we are deeply committed to the core cast of characters and their story.

At its heart, Onegin is a dramatic quartet between two sisters and two male friends and evolves into a cat's cradle between the bookish Tatiana, danced Friday with transcendent
Advertisement
and translucent purpose by Kochetkova, and her sister Olga, captured with coquettish clarity by Clara Blanco; Olga's boyfriend, the passionate Lensky, impeccably embodied by Gennadi Nedvigin, and Lensky's bored city friend, the aristocrat Onegin, danced with nuanced depth and hauteur by Ruiz.

Onegin, stuck among what he regards as the unsophisticated country gentry, trifles with Tatiana, and she falls hard. At a ball later, embarrassed and annoyed by Tatiana's evident passion, he punishes her innocence by dancing with flirty Olga, not only confusing Tatiana but inflaming his friend Lensky, who is overtaken by jealousy and humiliation. A challenge, a duel and a senseless death aren't far away.

As the ballet moves inward toward the duel, which takes place upstage in a seemingly distant place, it narrows to a series of dangerous trios. Narrowing further, the ballet culminates with a duet between a mature Tatiana, now married to a loving Prince Gremin and a mother, and a spiritually washed-up Onegin, a doomed version of the lovers' duet that Tatiana imagined earlier in the night when she was still an innocent girl.

Movements and motifs we saw earlier are echoed but transformed, and each time these messages worm deeper into our skin. This is the power of "Onegin": the movement itself, not the story line, becomes the potent messenger for the contortions of heart and mind.

Opening night, the principals took Cranko's intentions and shot them to the moon. Kochetkova was an almost translucently dreamy girl who startles awake, seeing Onegin. Her whole body seems to open in response, her face absorbing the world she had previously ignored as she read, and she makes us feel the force of love at first sight.

We know Luiz, too--the defensively callous egotist who takes shelter from emotions in arrogance. Blanco's Olga lets us feel both the insouciance and the shallowness of the soubrette while Gennadi, an elegant version of ballet's man in the shadows, embodies wounded pride, making us feel the moral purpose of Lensky's emotions.

Cranko's craftsmanship is obvious throughout. It appears in such motifs as the innocent game of surprise that happens early on, when Lensky sneaks up on Olga, who is preening at a mirror. This evolves into a motif between Onegin and Tatiana, then is picked up by Gremin.

Leaps defy the courtly trajectories of ballet, whether it is the breathtaking ensemble jetes that course from diagonal to diagonal or Tatiania's enormous bounding into Onegin's arms, or her extreme penche arabesques or her rippling bourrees that suggest a fluttering heart.

Many moments in the ballet, motifs echo the ballet canon, from "Swan Lake" to "La Sylphide" and even "Apollo." Catching the quotes isn't what matters. What does is how Cranko deepens the meanings of the dance phrases this way and alerts us that he is both working within tradition and pushing its limits. He lights a path that contemporary choreographers could follow but rarely do.

Where 'Onegin" falters is in Santo Loquasto's murky dappled décor and costumes, especially in the opening act, where the walls looked like bad sponge painting and the pastel hues undermine the modernist rigor of the storyline. The geezer dance that launched Tatiana's birthday ball was embarrassingly out of tune, as well -- a bit of coyness that had no place here. The music was also disappointing. While the segments are by Tchaikovsky, they are not derived from the opera but a series of well-cobbled shorter works that includes segments of orchestral and piano pieces orchestrated by Kurt-Heinz Stoltze for Cranko. If you wait for Tchaikovsky's signature musical flowering, you will be disappointed.

But the flaws seem trivial when the full heft of the evening is felt. They keep the night from being perfect, but that, in the end, may be most fitting.
Posted by ann murphy at 3:30 PM

What a wonderful emotion is!