Late in choreographer Pina Bausch's "Ten Chi," Dominique Mercy stands upstage wearing a wine-red kimono. He waits, palms facing outward, his gaze fixed on the middle distance. A man unties Mercy's sash, then slips the red gown off with ceremonial calm. A white kimono is revealed. That robe is peeled away. Below it, Mercy wears a purple gown. That, too, is slipped off and beneath it is revealed a black kimono.

Finally, the black gown is removed. With a small shock, we discover veteran dancer Mercy wrapped in yards of tissue-thin, blood-red fabric. When that, too, is shed, Mercy stands before us, all but naked. Next, he slips into a Western-style shirt and long Western trousers and begins a haunting dance solo.

Vignettes like this, which seem to sum up Japan as a culture that poignantly dresses itself both in its own and a foreign culture's traditions, pack the evening-long dance theater work performed by Bausch's Tanztheater Wuppertal at Berkeley's Zellerbach Hall Friday night.

"Ten Chi," in fact, is an homage to a culturally layered, often magical and sybaritically surreal Japan, created by Germany's high priestess of dance theater with her dancers, who first performed it in 2004. It is among her recent lineup of savvy and unsentimental love letters to whole cultures.

As an island country, Japan lives off the sea, with fish and seaweed as central to the diet as milk is to the French. It makes exquisite sense that the central prop created by long-time Bausch decor wizard Peter Pabst is an outsized whale tail downstage left and, upstage, deep right, a protruding mound of whale torso. The mythic whale's vast form, like reality itself, is visible to us only in part. 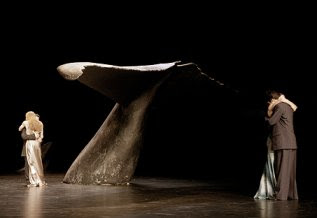 As a canny metaphor, the whale fragments get at the sometimes buried, always layered nature of Japan's traditions and also do a pretty good job of summing up the giddy displacement of love, sex and intimacy. These potent forces seem to lurk beneath the dancers' feet, compelling, comic and sometimes monstrous.

Female longing erupts throughout. A character, for example, goes gaga over gorgeous vegetables. Another gets hot over a sizzling black shopping bag. Still another is titillated to the point of hysteria by protruding feet in an otherwise deserted movie theater. Women's fantasies and longing overwhelm moments as much as cleanliness, solitude and anxiety did in "Nur Du," Bausch's 1996 portrait of the United States. It is no wonder that Japan is a country of fans.

A second decor element, falling petals or snowflakes, does for our sense of time what the whale parts do for our grasp of space. From early on, we see a single petal fall. Then, later, another. By intermission, a blizzard of white descends on the unpopulated but still-visible stage space. Bausch lets theatrical time run even as the audience leaves the theater to use the bathroom.

It was not a perfect night. There were fallow scenes, and segues from one evocative music choice to another often lurched ineptly. But Bausch is never after perfection. She builds operatic renderings of life that finger the comic, the grotesque and the beautiful. "Ten Chi" had plenty of it all.

And for the lovers of sheer movement, the wild calligraphic dance solos that stocked the evening were a joy. They were full of the flexed feet of Noh, the lunges of martial arts, the robotic angles of video and the sinewy ripples of geisha dance. They also ranged from the virtuosic work of young dancers to less elastic but theatrically keen solos of the older performers. 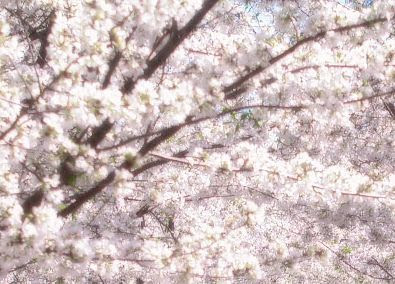 It was a blizzard of such solos that brought the night to a stunning close. How apt it seemed that in a landscape so alive with petals/snow, everyone danced alone, yet no one, but no one, looked lonely.
Posted by ann murphy at 10:06 PM No comments: 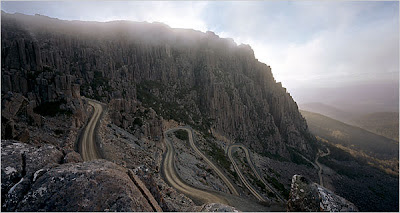 ABOUT A DECADE ago I was in the town of Launceton in the state of Tasmania, which is an island off the south coast of Australia. Tasmania is famous for its devils (nocturnal marsupials, relatively gentle unless you are a nocturnal rodent), wombats (herbivorous marsupials with square excrement), landscape (wild rivers, lush mountains, stormy seas) and conservative residents (think Kansas, 1956).

It was night. I was by myself in a car, driving back to the B&B after a meeting. Uncertain of my direction, I pulled to the curb to get out my map. Looking up, I saw on the corner, bathed in the streetlight, a man alone. He was dancing.

There was no music. The street was entirely deserted except for me and him. He was not performing. He was just dancing.
I am the last person to be sentimental about drunkenness -- I am guessing that booze played a profound initiative role in this impromptu display of the terpsichorean arts -- but I was still charmed by the moment. I smiled then, and somehow the shutter of my memory clicked when I smiled, and that image is with me now.

He was wearing a dark pea coat and bulky shoes. He might have been a sailor. Sailors have a grand tradition of male dancing, hornpipes and the like, and he may have been answering an ancient call. It was a stately dance, whatever it was, suffused with regret and dignity.

Perhaps he was making a graceful gesture unto the Lord. Perhaps he was just blotto. Doesn't matter. His dance is mine now, to do with as I will. Viz: MEN -- AT LEAST pale guys like me -- don't dance enough. Somehow between the age of the windjammers and now, dancing became unmanly. Lots of men I know ``don't dance,'' they often announce. There are also women who ``don't dance,'' but they are rarer.

An enduring image from high school: two girls dancing together, for want of partners, for love of dancing anyway. A lot of guys are situational dancers -- they will dance during the courtship phase, then stop as soon as the mate is securely bound by mutual vows.

The idea of dancing as an interior event has been lost. It's either a social thing or a performance thing; it somehow involves awareness of a partner or an audience or both.

And yet they do not dance. They work on their little machines with fierce dedication, not a move wasted, not a gesture inserted merely for the sake of gesture. Is the music being used merely as white noise, to shut out other sounds? Are they all listening to Beethoven string quartets and following the complexity of thematic development? Or . . . what?

Sometimes, on my little reclining bicycle, I dance. I keep my eyes closed because I fear the opprobrium of others. Nevertheless, I am addicted to the rhythm; it's what keeps me coming back.

I recently played the soundtrack album to ``The Sopranos.'' The theme by A3 was on. ``Got myself a gun,'' I sang softly, and did a small interpretive movement involving pointing my fingers and cocking my thumbs. All of a sudden, I wanted to be on a lonely street corner in Tasmania.
Posted by ann murphy at 10:38 PM No comments: