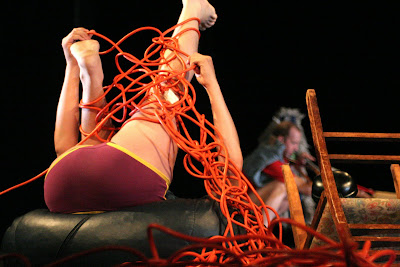 the stars of the john japserse evening came in constellations. the first on my list, since it shaped the entire production, were the hanger-tapestries that spilled from the flies, spectral and beautiful, a beauty heightened by bright crackling lights that ascended and descended during the 90 minute performance. i wondered only late into the evening what bizarre array of clothing the donated hangers might have held before the show. they carried few ghosts with them.

Second was the magic of Zena Parkinson 's music, which was as much a partner to the evening's performance as the dancers were to the movement. Harp wizard, winsomely dressed in a stylish confab of fed ex tyvek envelopes, the NY based musician plinked and tinkled and droned and otherwise gave life to the air and brought layers of sensation and thought to the action on stage that deepened and heightened it.

Then there was the group of elastic, protean movers who, combining fixed patterns with the danger of improvisation, wove their own tapestry. It was full of raw sensual energy and elegant physicality, not unlike the hangers themselves-isosceles triangle topped by a definite hook--the dancers' legs, which protruded repeatedly to stop and block onrushing action stuck out in space like the hangers' necks.

Jasperse is wry and profoundly ingenuous, his lithe body still expressive of the gawky kid, his balding head at odds with his delicate bone structure and nasal voice. He looks like he should always get to be a boy, although he has a man's concerns--the state of the world, for one.

"misuse liable to prosecution" didn't bill itself as a funeral, and clearly it was much more than simply a rite in honor of a species determined to move toward extinction (the very act of dancing defied our end); but the big issues were on the table--corruption, piracy, values that lead to pillage and plunder, obstruction and deflation. and with the bleating wail of a bagpipe as its player processed down the aisle at the night's close, and jasperse's fantasy of blowing the walls of the theater sky high to create otherwise impossible intimacy between his audience and his players, the terrible contradictions of living in the 21st century were upon us. this is, afterall, the century where the mad outcome of a world economic program of endless, manufactured need that dries up the earth's bounty and despoils what's left is upon us: large portions of the planet are starving, plunged into auxillary wars, and, in some cases, about to go under water, while a small royal percent (us, at all income levels) live like tutankhamen's extended family. it's the same old story of greed and destruction now taken to levels that make our 1960s fear of atomic annihilation laughable.

Jasperse is not didactic, though he's silly in a charming, almost daft way. He talks to us through the megaphonic portal of an orange traffic cone poised on a broom, his high whine of a voice telling us at that peculiar but apt remove what we already know and nevertheless need to hear, again.

thank you, john. thanks, too, to the dancers.
Posted by ann murphy at 4:03 PM No comments: