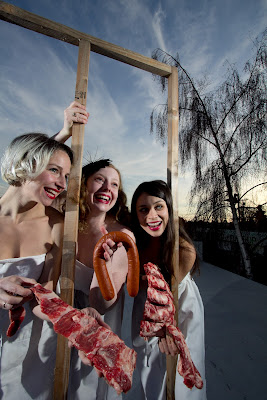 If you arrived with an appetite, though, the production's barmaid, the comically déclassé, Lacey Carter, offered up cocktail sausages and  two buck Chuck, all with a dissolute air that suggested she might have spat in the drinks and let the dogs roll on the ground moments earlier.

Chowing down a plate of baby wieners and lousy wine helped implicate the audience in a raw night that was above all passionately curious about women and men as forms of meat, with our distinct, and distinctly bizarre, fleshy parts, and the relationship between our various forms of hunger. Most pointedly, the choreographers were interested in the vast swamp of carnal longings that either oozes from our bodies, or lurks in psychic closets. The id, as hulking beast, surfaced from the swamp and crept from its hiding place at almost every turn.

The dancers (the majority Mills College grads and current students, undergrad and grad both), despite little rehearsal time, danced with the collective intelligence of bodies that know each other and how to move as one, rather than a pickup company, which they were. (Disclaimer: I know many of the performers.) When the slip-clad Perena forced her way into a party scene, like an awkward but unstoppable backwoods child, the ensemble performed a familiar self-absorbed beauty queen meets mean-girl routine.While it was Perena who symbolized primal urges and barely-restrained civility, it was the group of men and women engaged in their social drama who had all the problems. What were they to do with this outlier force?

Katherine McGinity, for one, posed 40's pin-up style, while Elizabeth Morales' cocktail hauteur suggested that, when the moment was right, she would be in the closet with the apt available body in a heartbeat. Perena's raw presence unmasked the truth of the partyers' brittle preenings which were, in fact, far less about civilized engagement than about stylized expressions of barely contained insecurity and almost aggressive longing. When, as though by a spell, that longing was unleashed, everyone began hilariously gnawing and sucking on everyone else, tottering between the acceptable and raw transgression.

If Perena was the collective id, Trottier, who next appeared, embodied a poignant nightmare version of the psychologically imprisoned woman, like Coppelia's mechanical doll with a predilection for cutting and pain pills. Wearing a pink baby-doll negligee, she performed sorrowful, furious repetitions of fragmentary movement rife with vulgar sexual gestures that themselves were bursting with displaced anger, sorrow, and imploded passion. It was a potent etude of distorted desire through movement that was wonderfully fractured and comically lewd. Trying to break out of her mechanized state she expressed the limits placed not only on the modern female body but also on the sensuality of the contemporary self.


The female chorus that included Morales, McGinity, Magee Page-Stokes, An Hoang, Prudence Amsden and Judene Small, had meaty little starlet cameos (Gretchen Jude was responsible for the smart, irony-rich music mix), while the men had their own tropes, notably a table dance and a chair dance, in which they tried to use objects to bridge the myriad existential gaps in their path. As familiar as these clowning motifs were they were surprising and hilarious. The acrobatic chair play, particularly, and the men’s blend of unity and competition, brought pathos to this stunning first production. Brian Quackenbush's acting chops were especially fierce as he led his team, which included Lucas Buckman and Mario Gonzales, through their self-made trials. It was an ensemble act of awkward risk and dexterity that gave the post-modern struggle a comic, true-clown tenderness.

This fledgling troupe deserves plenty of exposure and support. They blend an array of dance forms and performance styles into something far more delectable than any mince I've ever eaten.