With spring in the air, Smuin Ballet opened its winter run last weekend at Walnut Creek's Lesher Theatre in a program of light, well-executed work that ranged from the sultry to the insouciant. The newest and most cheerful dance came at the end of the program -- resident choreographer Amy Seiwert's cheeky medley, "Dear Miss Cline," set to songs by the pioneering country singer Patsy Cline. 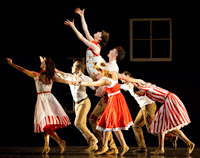 This was a ballet of apparent nostalgia, with the women outfitted in Jo Ellen Arntz's 1950s-style red and white shirtwaist dresses, middie blouses, the occasional neck scarf and low-slung pants, while the men were suited up in cuffed, short-sleeve shirts and bland trousers. In other words, it had all the elements to be temperamentally fitting for Smuin Ballet, where dance and sentimentality are inseparable.

But Seiwert is not the dewy, he-man-she-woman romantic that Smuin was. In fact, valentines' themes of loss and longing are canny ways for the choreographer to push against stereotypes and cleverly encapsulate life as invariably modern, humane and wry.

Part of Seiwert's power comes from her dancing women, who are potent, flawed actors, even when the tales she has to tell are full of heartache or longing. This sharply distinguishes her work from the Americana of choreographers like Paul Taylor and Twyla Tharp, not to mention Smuin, who too often replicate the weary stereotypes of strong men and weak or shrill and hungry women.

As this polished cast so cheerfully showed, especially elegant Terez Dean and Christian Squires, pistol-packing Erin Yarbrough-Stewart and John Speed Orr, both the men and the women do plenty of pushing and pulling.

While keeping the allusions of '50s playfulness alive, all the members of the cast incised the air as though they were etching glass. Underscoring the work's fundamental optimism, designer Brian Jones created a space of elegantly simple floating window frames and clean, bright lighting.

Nestled in the middle of the program was a lugubrious meditation, "Stabat Mater," a 2002 work by Smuin dedicated to 9/11 in which the late choreographer tried to wrestle the national trauma to the ground.

Set to Dvorak's "Stabat Mater" and danced with purpose and clarity by Susan Roemer and Joshua Reynolds, and with elegance by the company, "Stabat" alludes to the modernist ballets of Antony Tudor, which are at once grounded in the ordinary and weighted and tragic. But unlike Tudor, Smuin runs out of ideas midway and devolves into sentiment. With Reynolds as a ghost come to visit grieving Roemer, the work echoes Giselle, though twisted for an age of global terror.

And if "Stabat" is a nod to "Giselle" then "Eternal Idol" is a bow to a steamy Victoria Secret ad. In a work inspired by Auguste Rodin's sculpture of an amorous couple rising out of and pressed into a boulder, Smuin presents lovers, here the supple Robin Cornwell and elegant Joshua Reynolds, in beige unitards in a pas de deux of kitschy ardor. Relying on suggestive leg battements, basic turns and uneventful leaps -- all orgiastic exclamation points -- "Idol" is inarticulate enough to be right at home in a classy strip club.

By contrast, "Tango Palace" is the kind of ballet the late choreographer excelled at -- a sensual and occasionally comic homage to tango parlors via ballet that makes good use of Smuin's musical theater know-how. This is a dance that knows it is a show piece and sidesteps "Idol" tastelessness.

Smuin may miss the complex nature of tango leg entanglements -- they are a form of battle, not just of sex -- but artistic director Cecile Fushille has sharpened the dance's contours and made the eight-dance medley show off the sultry talent of the company, with a spotlight on Jonathan Mangosing and Mallory Welsh.
Posted by ann murphy at 3:26 PM