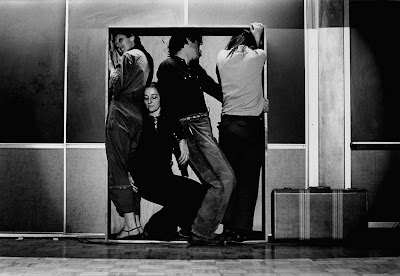 It is my great pleasure this afternoon to introduce you to Yvonne Rainer.

As many of you know, Yvonne grew up in the Bay Area and was one of the founders of the still-seismically important Judson Dance Theater, in New York City, where dance was subjected to revolutionary scrutiny from 1962 to 1964. She herself made history in 1965 with her now renowned No Manifesto, the famous document in which she said “no” to established dance and all its affectations and trappings. The following year she substantiated her ideas in movement with her work entitled The Mind Is A Muscle, notably the segment entitled Trio A, deconstructing and reconfiguring the physical language before you could say “Derrida.” She soon moved into filmmaking when the medium was still a solidly male domain, and in 1972 made her first feature-length work, “Lives of Performers.” She went on to make many more films meant, she says, “to confound in a certain way,” and always of political/feminist import and wit.

In talking about Merce Cunningham, Yvonne writes in her memoir Feelings Are Facts, “He just danced, and when he talked it was with a quiet earnestness that both soothed and exhilarated me….It was truly the beginning of a zeitgeist. You just “do it,” with the coordination of a pro and the innocence of an amateur.”

For over half a century, Yvonne has taken Merce’s ethos of “just do it” to extraordinary heights, as those of you who were here this morning had a chance to experience. Using such tools as task, game, speech and film in her dance, she moved decidedly closer not only to expression of authentic thought and feeling but also to embodiment of transparent authenticity.

In the 1970s she began her long and continued love affair with film and was only lured back to dance in 2001 by Mikhail Baryshnikov and the White Oak Dance Project, which commissioned After Many a Summer Dies the Swan and Trio A Pressured. Since the Yvonne has also choreographed a re-visioning of Agon by Balanchine called AG Indexical, with a little help from H.M. Her reinvisioning of Rite of Spring was presented at Documenta 12 and Performa 07.

Today she is a Distinguished Professor of Studio Art at UC Irvine in Performance and History of Experimental Film. She is the recipient of innumerable awards, including a MacArthur Foundation Award, the Wexner Prize and a Bessie.

In her poem “Helen of Troy Does Countertop Dancing,” Margaret Atwood writes that “nothing is more opaque than absolute transparency,” and this seems truly apt today. Yvonne demands that we flex our mind’s muscle in order to meet her in the clear land of deceptively simple and unadorned dance. Visionary choreographer have been called mother, goddess, high priestess and pioneer. With Yvonne, we can now add poet philosopher to the list.

I'll bet you can't guess which muscle in your body is the #1 muscle that eliminates joint and back pain, anxiety and excessive fat.

This "hidden primal muscle" in your body will boost your energy levels, immune system, sexual function, strength and athletic power when developed.